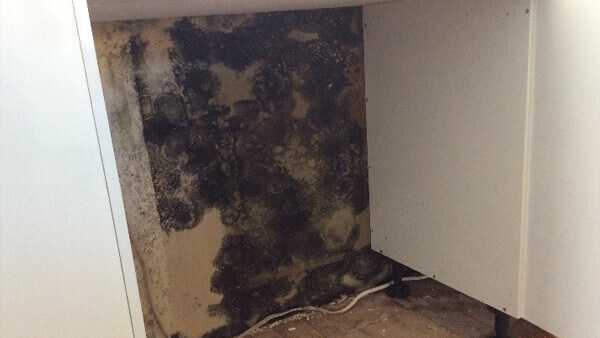 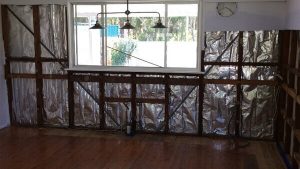 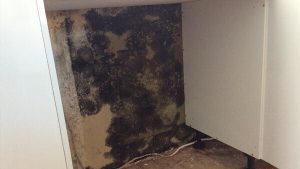 When a NSW Central Coast man bought his investment apartment at Blue Haven, he was keen to renovate and get a tenant in as soon as he could to start paying off his loan.

Having installed a new kitchen and given the apartment a fresh coat of paint, tenants moved in.

Unfortunately, as time when by, the tenants had persistent respiratory problems. Having explored all the usual health issues, their doctor suggested the problem might be mould in their home.

With a reputation as mould specialists, the Advanced Buildings Hunter/Central Coast team were called in to investigate. That’s when the extent of the problem was discovered.

There was extensive mould contamination throughout the flat. The source of the damage were four water leaks in the bathroom, the kitchen and behind the bedroom built-ins.

“As we uncovered the affected surfaces, the smell of the mould was enough to make you sick”, said Patrick Ashton, Restoration Estimator & Supervisor.

Our Occupational Hygienist reckoned it was the worst contamination he’d seen in 10 years.

Cost of Building and Restoration

A risk of further mould contamination

The risk of spreading the mould spores to other sections of the apartment, and to other properties in the building, was high.

A nasty mould strain which threatened resident’s and worker health

Worker safety was also crucial, as the fungus could have a damaging and long-lasting effect on their health. Testing showed that the mould was the notorious fungus Stachybotrys chartarum.

Commonly known as ‘black mould’, it’s a very nasty strain which produces a noxious odour and has a detrimental effect on human and animal health.

Take a look at our other Projects or call us on

We believe a great company also supports the wider community.

When you enlist Advanced Buildings to help build or restore your property, you can be sure you’re hiring the most qualified team in the industry.